(1) The first quantum lineshape calculations show that a new method to largely decouple a detection motion from its 0.1 K environment during one-quantum transitions will make it possible to evade detector backaction to measure the electron magnetic moment ten times more accurately.

"Backaction evasion" will be used to determine the quantum state of a one-particle system using QND methods that completely evade backaction, even that from the zero-point motion of the detection oscillator.

"Backaction circumvention" will avoid all but the backaction from the zero-point motion of the detection oscillator, despite the detector motion occupying some 20 quantum states. This is a new method that should greatly improve the precision of frequencies measured using quantum jump spectroscopy.

(3) A quantum cyclotron will be coupled to "quantum-limited" SQUID detector that bench tests indicate will heat the particle much less, will increase the detection efficiency, and will operate more robustly than conventional transistor detectors. A 200 MHz SQUID must be near to the particle but in a 60 times smaller magnetic field.

(4) A new solenoid is "actively shielded" to make this possible, and is "self-shielded" to cancel external field fluctuations. 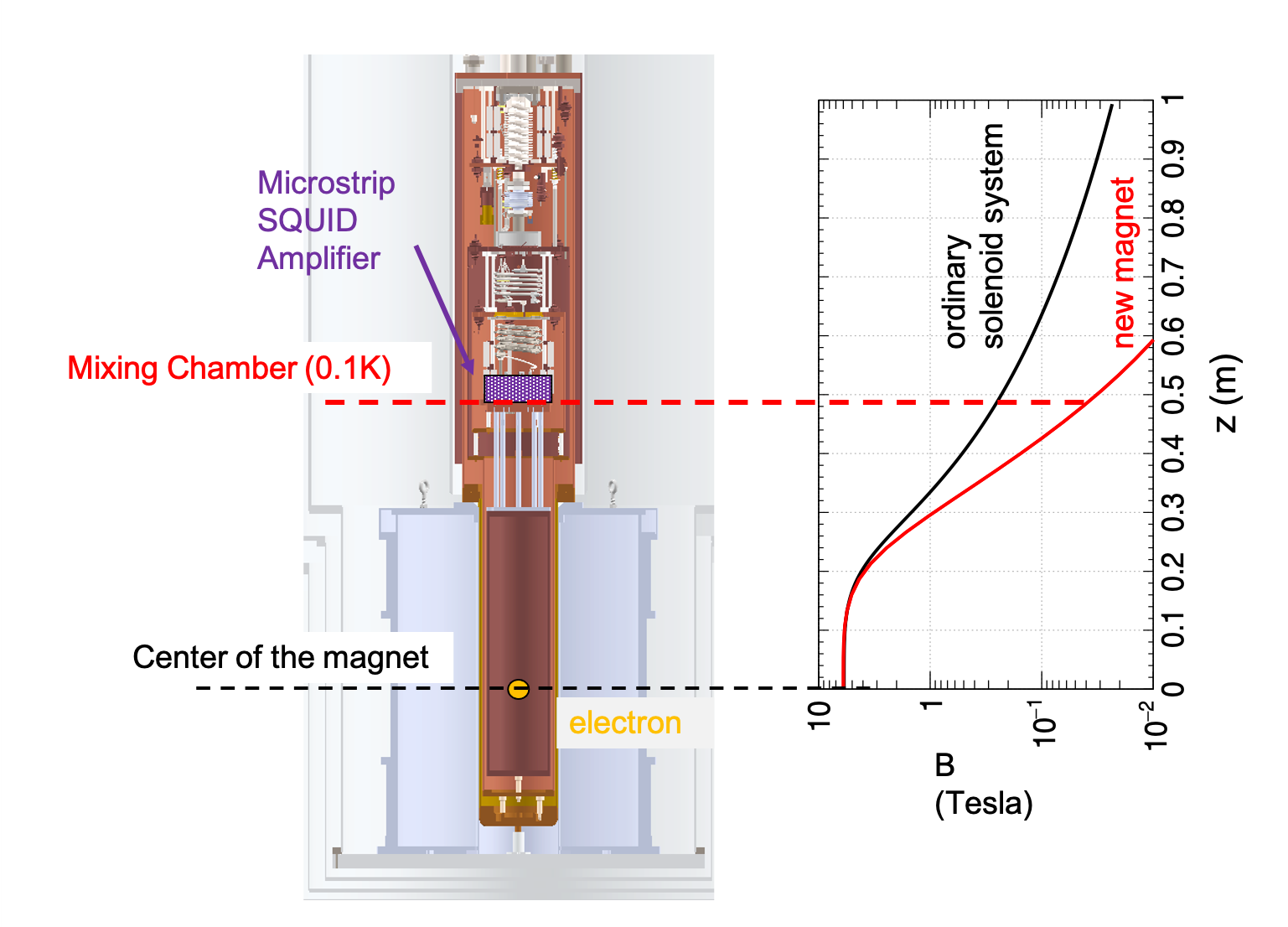 (5) A unique gas 3He NMR probe, demonstrated at cryogenic temperatures, is ready for tuning the spatial homogeneity of the new solenoid.

(6) Extreme suppression of spontaneous emission from electron/positron cyclotron within extremely low loss trap cavities would enable much more precise magnetic moment measurements. Calculations with Fermilab collaborators are seeking optimal cavity designs to be tested in a cryogenic platform under development.

A remarkable 1 part in 1012 agreement between the SM prediction and measurement has persisted for a decade. Intriguing discrepancies recently emerged at a slightly higher precision when two new measurements of the fine structure constant were used with SM theory to predict the magnetic moment.

A ten times more accurate measurement of the electron magnetic moment is critical for establishing whether the SM is able to make predictions that agree with measurement to 3 parts in 1014, or whether we have found the first evidence for BSM physics.

The Standard Model, the most fundamental description of physical reality, is the great triumph and great frustration of modern fundamental physics. All SM predictions that have been tested in a laboratory have been confirmed -- the electron magnetic moment being arguably its greatest triumph. At the same time, the SM is not able to account for basic features of the universe so something significant is missing.

The CPT invariance of the SM, for example, indicates that the big bang would produce essentially equal amounts of matter and antimatter which would then annihilate each other as the universe cools -- contrary to what we observe. The SM also cannot explain why it is made of matter rather than antimatter.

The most accurate value for fine structure constant will be a critical component of the basic system of units needed by a technological society.