Goals: An atomic hydrogen beam will be laser cooled using the vacuum ultraviolet (VUV) Lyman-α transition at 121.6nm. This first requires the development of the most powerful Lyman-α lasers to date, namely a 1 μW CW Lyman-α source which is more than 20 times more powerful than previously demonstrated sources. Next a cryogenic hydrogen beam will be laser cooled from 350m/s to ~20m/s with careful compensation of the decelerating atoms’ Doppler shift.

(1) 1 μW CW Lyman-α laser - Continuous wave laser sources have duty cycles and linewidths over that of pulsed laser systems. This makes them ideal for laser cooling. Resonant transitions in mercury can be used to enhance the production of VUV photons through the nonlinear optical process of four wave mixing (FWM). Prototypes of such a laser have been demonstrated [1,2], and improvements in the underlying technologies make this theoretically capable of producing enough Lyman-α photons to be useful for laser cooling. 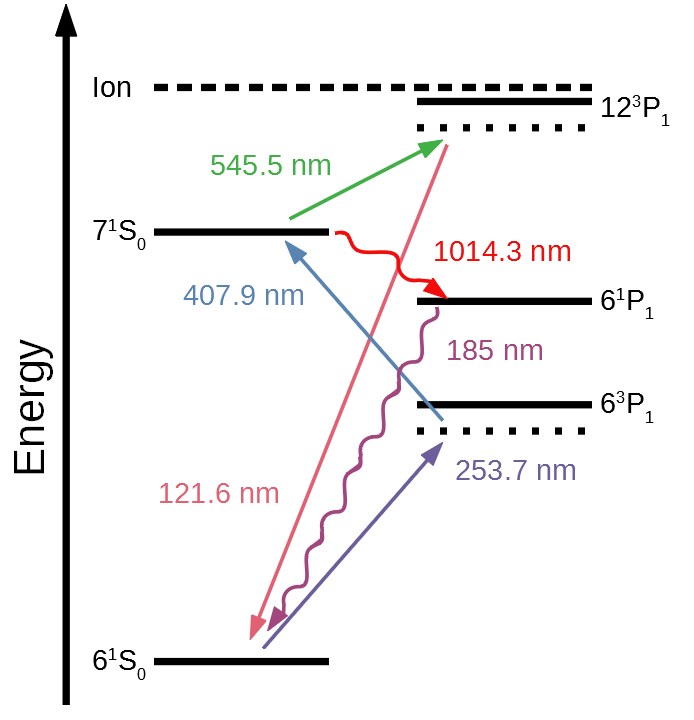 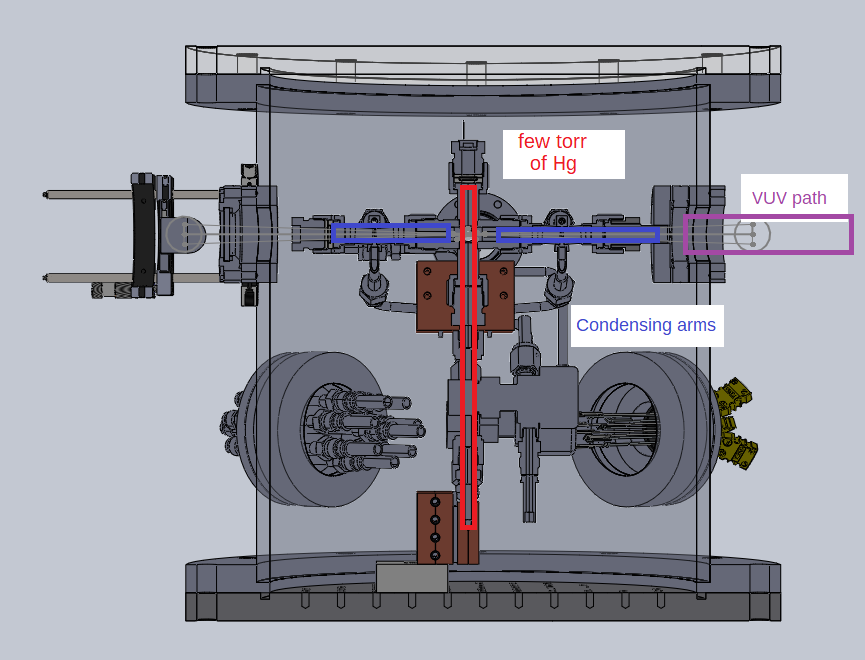 Left: Resonant transitions in mercury used in four wave mixing to produce Lyman-α. There is an additional decay from the 71S0 state that must be carefully minimized to maximize Lyman-α yield.
Right: Model of custom designed mercury oven currently being built and tested. Mercury is reflowed to the oven after each heating period to reduce mercury consumption.

(2) 5.7 μW pulsed Lyman-α laser - We have developed a 16ns 190nJ/pulse Lyman-α laser. The Ti:Sapph oscillator and amplifier produce megawatt level instantaneous-power pulses at 729nm which successively undergo second-harmonic generation (to 365nm) in a LBO crystal and non-resonant third-harmonic generation (to 121.6nm) in a phase-matched Krypton-Argon gas mixture. The short lifetime of the 2P state (1.6 ns) and large Lyman-α recoil velocity (3.26m/s) open the possibility of performing substantial laser cooling during the 16 ns pulse. Schematic of hydrogen beam with CW Lyman-α cooling and 1S-2S spectroscopy. Atoms pass from the nozzle, past a chopper, through a Zeeman slower, excited by a 243nm laser, and then decay as they pass through a detector.

Motivation: Historically, probing the structure of the simplest atom, hydrogen, has led to multiple revolutions in physics; pushing the precision of these spectroscopic measurements will likely lead to new breakthroughs. The 1S-2S transition, with a natural linewidth of 1.31Hz, is the most sensitive stand-alone probe of the structure of hydrogen (it is used to determine the Rydberg and fine structure constants) and is an excellent probe of physics beyond the Standard Model (Lorentz violation, time variation of the fine structure constant, CPT violation via comparison with antihydrogen). However the full potential of this transition has not yet been realized since it has merely been observed at 2kHz at best [3] (mostly due to transit time broadening).

We are grateful to the Templeton Foundation for their support for the CW Lyman-α laser and the hydrogen laser cooling experiment.